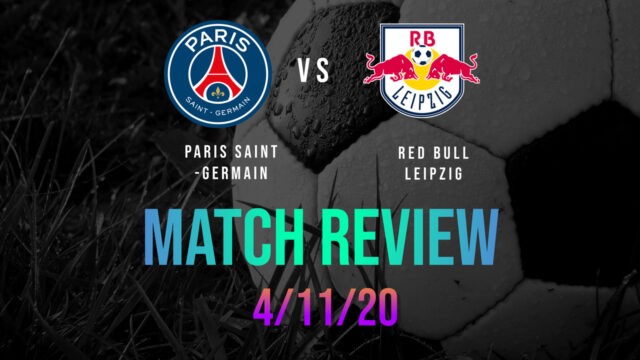 RB Leipzig faced the 2020 Champions League runners-up, Paris Saint-Germain at home in an apparent rematch of the semifinals the previous season. The French side was without its front-three of Neymar, Mbappe, and Icardi: all three being ruled out with injuries.

RB Leipzig went into the match having lost each of their last 2 matches: one of which was a 5-0 thrashing from Manchester United in the UCL; and the other was a loss against Borussia Mönchengladbach in the German top-flight, which saw them drop down from the top of the Bundesliga table. Paris had enjoyed comparatively better form, winning each of their last 2, getting clean sheets in both.

The game kicked off with the Parisians in possession, who took the lead in the 6th minute itself. Kean intercepted a stray back-pass from Dayot Upamecano and played it through to Angel Di María, who calmly slotted it past Peter Gulasci to give the away side an early advantage. Two minutes later, on the other side of the pitch, Haidara had his shot saved by Keylor Navas, the deflection from which fell to Angeliño, who’s shot was blocked by Florenzi. The ball then fell to Willi Orbán, whose cross was cleared well away by PSG’s captain, Marquinhos.

In the 15th minute, Sarabia played a lovely lofted cross to Kean from near the touchline, having him bear down on goal, but his shot was blocked by Upamecano’s arm and the referee pointed to the spot straight away. The subsequent penalty was taken by Di María, which was saved by Gulasci: the Hungarian’s first-ever penalty save in the competition. In the 42nd, Former PSG player Christopher Nkunku drove his shot home from outside the box to score the equalizer. The half ended with parity between both sides.

Twelve minutes into the second half, a penalty was awarded to the German team for a handball by Presnel Kimpembe. The penalty was then converted by Emil Forsberg, Navas went the right way but just couldn’t get a strong enough hand to it. The goal gave Leipzig a lead for the first time in 3 matches, albeit narrow. Then, in the 69th, Idrissa Gueye was given a second yellow, reducing the Parisians to 10-men. They were further reduced to 9 in the 90+5th when Kimpembe’s rash challenge on Poulsen had him sent off with a second yellow. The match ended, not long after.

This loss saw PSG drop down to 3rd in their table, below Manchester United and RB Leipzig.

© 2021 Outfluent.blog All rights reserved
We use cookies on our website to give you the most relevant experience by remembering your preferences and repeat visits. By clicking “Accept”, you consent to the use of ALL the cookies.
Cookie settingsACCEPT
Manage consent

This website uses cookies to improve your experience while you navigate through the website. Out of these, the cookies that are categorized as necessary are stored on your browser as they are essential for the working of basic functionalities of the website. We also use third-party cookies that help us analyze and understand how you use this website. These cookies will be stored in your browser only with your consent. You also have the option to opt-out of these cookies. But opting out of some of these cookies may affect your browsing experience.
Necessary Always Enabled

Performance cookies are used to understand and analyze the key performance indexes of the website which helps in delivering a better user experience for the visitors.

Analytical cookies are used to understand how visitors interact with the website. These cookies help provide information on metrics the number of visitors, bounce rate, traffic source, etc.

Advertisement cookies are used to provide visitors with relevant ads and marketing campaigns. These cookies track visitors across websites and collect information to provide customized ads.

Other uncategorized cookies are those that are being analyzed and have not been classified into a category as yet.