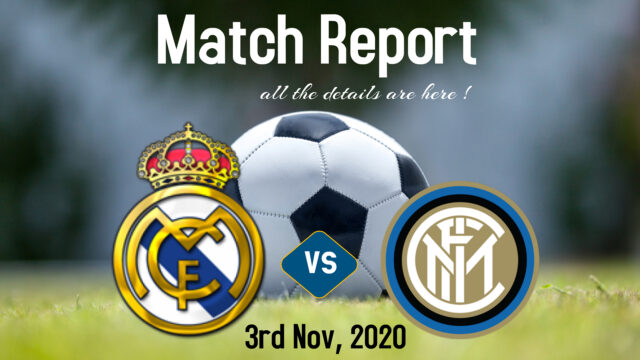 Real Madrid was up against FC Internazionale Milano in the UEFA Champions League at the Spanish capital. The encounter took place in the less spectacular Estadio Alfredo di Stefano with the Bernabeu being closed for renovations. Both teams were coming off a poor run of form, with Real having won only 2 of their last 5 matches, drawing 1 and losing 2; and Inter having won just 1, drawn 3, and losing 2: both the teams desperately seeking a win.

Real had their talismanic captain, Sergio Ramos back, whom they sorely missed in their game against Shakhtar. While Inter were without their top-scorer this season: Romelu Lukaku.

The kick-off took place with the Los Blancos in possession, whose first shot on target came in the 4th minute itself when Eden Hazard teed up Asensio in the penalty area, who had his shot tipped over the bar by an alert Samir Handanovic. Inter squandered a major chance in the 10th when Hakimi played the ball across to Perisic on the left when it would’ve better-suited Lautaro Martinez coming through the middle. Perisic’s subsequent cross was too high for Nicolò Barella, who had his header pushed over the bar by Courtois.

The breakthrough for Real occurred in the 25th when Hakimi’s stray back-pass was latched onto by Benzema and then turned goalwards after Handanovic made a desperate attempt to tackle. Not long after, Real doubled their lead during a corner when Sergio Ramos headed into the bottom-right corner following a stunning ball from Kroos. Inter responded a mere 2 minutes later: Nicolò Barella’s delightful flick off the back of his heel found Lautaro Martinez, who drilled the ball into the net, halving the deficit.

The second-half commenced with Real narrowly leading Inter 2-1. Perisic drew his team level halfway through the 2nd half after his shot found its way past Courtois. In the 80th, Mendy found substitute Rodrygo Goes in the box, who drove the ball into the net emphatically. The second-half ended with 3 additional minutes and was rather uneventful with only 2 clear-cut chances which were converted.