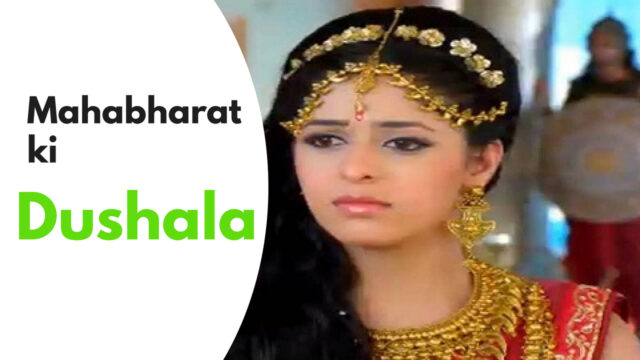 In epic Mahabharat, Kuru dynasty ruled Hastinapur. It is said that, Mahabharat consists of all the situations, that may arise in one’s life. There are many characters, around whom the story moves.

There is one character Dushala, who was only daughter of Gandhari and Dhrutrashtra. Except Duryodhan & Dushasan, 98 Kaurav and Dushala have little mention in the epic. With Sage Vyasa’s boon Gandhari became mother of 100 sons. But, she had a wish to have a daughter, too. That wish, too, was fulfilled by Sage Vyasa’s boon.

That way, Gandhari became mother of 100 sons and 1 daughter and Dushala was the only sister to hundred Kaurav. There are not many references of her upbringing. Only thing that, she grew up under teachings and guidance of Pitamah Bhishma, the patriarch of Kuru clan.

Being only daughter within family, she had a childhood, full of joy & happiness. There are some references that, unlike other Kaurav, she was not influenced by Duryodhan’s hatred for Pandav and she had love and affection for Pandav during their togetherness in childhood.

For Audio-Visual experience of this blog

After joyous and happy childhood. She probably had a miserable married life, after marrying Jayadrath, the king of Sindhu empire. Some question, why Duryodhan didn’t marry her to his closest friend Karna? Probably Duryodhan had no say in this. Or this marriage took place, when they were very young and Duryodhan hadn’t become friend with Karna.

There is a reference in Adi parva that, Dhrutarashtra chose this alliance for her, upon careful examination. Probably, there could have been consultation with Shakuni, who had great political insight. In those days marriages in kingdoms had a strong political backdrop. The possible reason could be that Jayadrath, apart from being the king of Sindhu, had a powerful allies like Magadh, Madra, Gandhar.

There is a reference that, apart from Dushala, Jayadrath had two other wives. One from Gandhar Kingdom and other from Kamboj. He was also attracted to Draupadi. During exile of Pandavs, Jayadrath kidnapped Draupadi to marry her. However, Pandav chased and captured him. Bhim wanted to kill Jayadrath, for his misadventure. But, Draupadi reminded Pandav of Dushala, their sister, who will be widow. That is why Pandav spared him for their sister Dushala’s sake. Bhim shaved his head as punishment and sent back.

There is a reference that, Jayadrath happy told Dushala about the ordeal faced by Pandav after losing the game of dice (Dyutkrida) to Shakuni, who was playing on behalf of Kaurav. But Dushala was sad to hear about the price Pandav paid.

Everyone knows that Jayadrath was slayed by Arjun in the great war of kurukshetra. Dushala’s son suradh was made king of Sindhu after Jayadrath’s death. He ruled the kingdom for few years, under her guidance as Rajmata.

Few years after Kurukshetra war, Pandavs arrange ashwamedh yadya to unify large nos of kingdoms in to a strong nation. The Ashwamedh horse reached Sindhu kingdom, along with army of Pandav. Sindhu kingdom army fought a fierce battle with the army of Pandav to avenge death of Jayadrath. But, their loss was destined. In the meanwhile, with the news of arrival of Pandav and their army, Suradh fainted out of fear and he and died.

There are two conflicting references here, in one Dushala goes to battleground to face army of Pandav, but Arjun goes in front of Dushala’s army without any arms, to make peace with her. As per other reference, After Surath’s death, Dushala’s grandson challenges Arjun, but Dushala goes to battleground and pleads mercy for her grandson and stops the battle. Pandav were shaken with the news and feel sorry for their sister and death of their nephew. Not only they stopped war, but consoled their sister for her son’s death. Before leaving they incarnated her grand son as the ruler of Sindhu kingdom. They also spared Sindu kingdom from the unification process undertaken with Ashwamedh Yadna.

Though, Dushala had a joyous childhood, her later life was challenging !