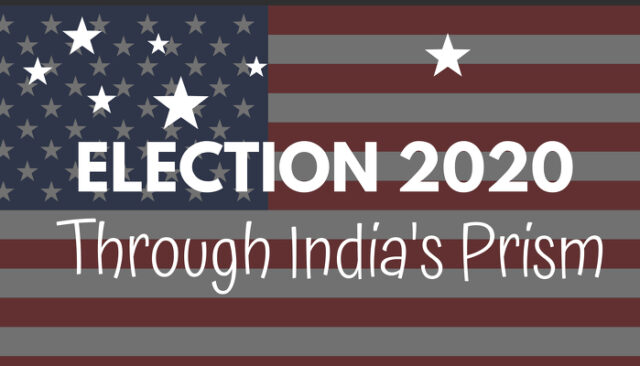 American elections, by far, one of the most, if not the most followed elections in world. It is not just because, it is the oldest democracy but America being the most powerful country in the world, in terms of economy and military power. The election process is very complex! It has thrown many surprises in past, like less popular candidate winning over most popular candidate.

World-over, change of power and administration, at the helm, may not result in paradigm shift in their policies, towards neighbouring countries or countries with economic ties. But, when it’s America, it’s different! There is restlessness among few countries. Most large economies (including India) have at least few things in the pot (if not “All In”), and the result of the elections will definitely have some rub off effect on their economies and decide their relationship with America.

For India, the largest democracy in world, elections in America, the oldest democracy, have always mattered, since late 1990s. No one can deny that since late 1990s, India’s economic prosperity got linked to America. Our exports have skyrocketed from ₹ 4 billion in 1991 to ₹ 330 billion in Aug-20. Our IT industry is thriving because of America. Since, they took charge, the current administration was focussed on “Let’s make America great again” and our HI-B visas came in the line of fire. With the job losses linked to Covid-19 pandemic, the situation is aggravated. Though, there won’t be any drastic change in the policy, a change in administration can get India, a much needed sigh of relief.

With a visible downturn in economic activity, linked to Covid- 19 lockdown, China has started flexing muscles with India, over border issue. Probably, China is thinking that Indians have turned weak (they are hell wrong!) and they can pressurised. With the might and bravery of India’s forces, it is impossible for China. India has come far ahead since 1962. American administration, having been caught napping on Covid-19 outbreak in their backyard, are looking at every opportunity across world, to counter Chinese aggression. Current administration is openly supporting India in this current standoff with China. However, a change in administration in America won’t “possibly” change this stance.

For America, India is important partner, not just because of its economic ties with India, but also by virtue of the thriving Indian American community, that decides fate of elections in many pockets of America. The Indian diaspora, have largely been balanced, as either way they have to get along with the administration. There have been changes in past and there would be changes in future, but any change in administration won’t matter much to them.

Indian Prime Minister has built a great rapport with current administration, through many bilateral summits or visits to America. For him, change in administration would mean to make a new beginning, if not start all over again.

After all, elections are all about perceptions !

Miraculous survival of baby from airstrikes in Gaza

Sean Connery – The legend dies at 90