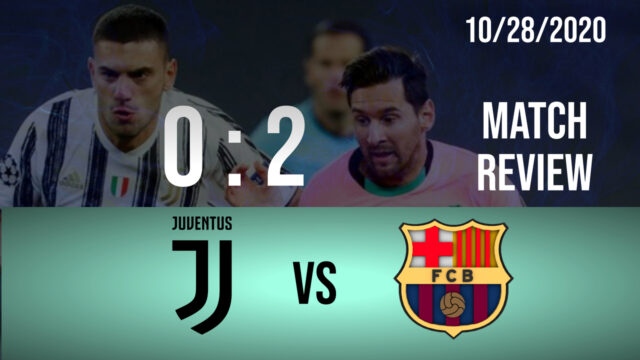 FC Barcelona and Juventus faced off against each other in the UCL on Wednesday evening in the Allianz Stadium, Turin. Both teams went into the highly-anticipated tie after disappointing results in their respective domestic leagues. FC Barcelona had suffered a heavy 3-1 El Clasico defeat against arch-rivals Real Madrid on the previous Saturday while Juventus scraped to a 1-1 draw against the mid-table team, Hellas Verona.

Juventus were to play without their talismanic attacker Cristiano Ronaldo who was ruled out for this match because of a positive Covid-19 test. Barcelona missed veteran-defender Gerard Piqué who was sent off in their Champions League match against Ferencváros; and Philippe Coutinho, who was injured.

The match kicked off with Barcelona in possession, who didn’t take long to create chances. Their first came in the 2nd minute following a bad pass from Merih Demiral, straight to Lionel Messi at the edge of the six-yard box whose shot was blocked by Bonucci. Another chance came seconds later when former Juventus player Miralem Pjanic set up Antoine Griezmann for a shot that rattled the post.

Barcelona’s next big chance in the 14th minute saw Messi find Ousmane Dembele in space, far on the right flank with an exquisite pass. Dembele cut in on his left and then fired a right-footed shot outside the box which took a huge deflection off of Chiesa’s foot and went into the back of Szczesny’s goal who could only watch. A minute later, Cuadrado played a through-ball to Alvaro Morata who went in behind the defenders to score, only for the linesman to raise his flag after the ball went in.

The first-half ended with a missed shot from Messi in the 22nd minute; and yet another offside equalizer from Morata near the half-hour mark being the only major chances for either side. For all their domination, FCB were only a goal up going into the second-half.

Ten minutes into the second half and the ball ended up in the back of Neto’s net following a shot from Morata, but a VAR review had the goal ruled out for offside. With a quarter of an hour left to go, Cuadrado went down in Barcelona’s box for what was seemingly a penalty but was booked for simulation by the Dutch referee, drawing no protest from the Columbian. Not 90 seconds later, Griezmann was in to score but narrowly dragged his shot wide off the right-hand post.

In the 85th minute, Demiral was sent off with a second yellow after a reckless challenge on Pjanic. Substitute Ansu Fati was bundled over in the penalty box by Bernadeschi in the 90th minute to win Barcelona a penalty. Lionel Messi stepped up to the spot and fired the ball into the top-left after sending Szcsesny the wrong way.

The game ended at 2-0 with the home side failing to muster a shot on goal and a victory for the Catalan club.