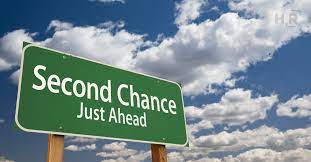 Life always gives second chance in most aspects of life, off course not all of them. If you break an egg, you can’t join it back, but you can always have another egg.

The loss of opportunity could be actually a failure during the opportunity, due to inexperience or ignorance. Or it could be non-realization of opportunity. In either case, you repent. What is important is that, you don’t just keep repenting about it.

Your bad food habits result in weight gain. You get opportunity to reduce it, as long as you are ready to go through the strict diet program.

My friend’s son selected engineering after 12th. After completing 2 years of engineering, he realized that he was not going to be happy, being engineer. He declared to his parents. They were shocked initially, but later happily allowed him to start over again in different stream. Now he is happy in his new stream.

Many a times you inadvertently hurt a friend. That results in sour relationship. If you accept the mistake and apologize then the relations turn healthy again and you become BFFs again.

There are many examples of how people have miraculously survived serious accidents and started living their normal life again.

There are many examples of love marriages ending in divorces. What could have gone wrong, is not important. Both of them having realized that they can’t live together, take a conscious decision of separation. That opens door of opportunity, to find a better partner to spend with life with. Most of them get remarried and live life happily, ever after. So there is nothing wrong individually in them. It is just that, they were not compatible with each other. They recognized and corrected the course.

I know a person who committed a fraud, for his addiction of gambling. He siphoned large amount from the cash receipts of a company. Imagine, life gave second chance to him, too. The employer didn’t fire him, instead gave him opportunity to pay back and continue working. Now, he is working well in that organization. People have forgotten about what he did it past.

There is famous case of a politician, who cheated on his wife. But, she forgave him and now they are living normal life.

Most criminals also get chance of rehabilitating their life, after completing their sentences. Off course, it always happens, when they are courageous enough to adopt righteous path.

Without any exception, in every situation that people have grabbed the second chance, there had been a self realization of mistakes committed in first chance. Then there is courage, to accept the mistakes and correct the course. And finally, being grateful for the second chance and not taking it as an entitilement.

Introspection for internal flaws, healthy discussions with close friends, mentors, and relatives about correcting those flaws will definitely lead to positive realization from second opportunity.

Be rest assured, life will not just give you second chance, it keeps giving you as many chances as you wish, as long as you are courageous enough to embrace them with both arms.

When you come across the second opportunity, make sure to make a gold out of it.