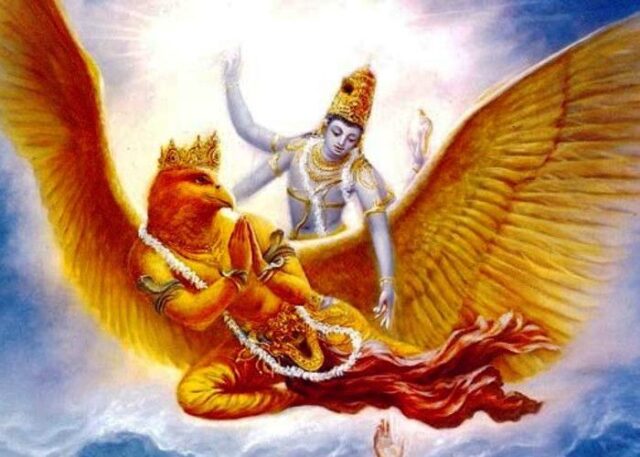 If you prefer Audio Visual experience of the story in Hindi, Please watch –

When we Indians think of Garud, few nouns cross our mind Speed, Power, Force and Reach. Now, these are spontaneous, because during our formative years, we have read or heard stories about Garud’s adventures.

We all know about him because, he is vehicle mount of lord Vishu. We picturise him, having a strong human body, with large wings & eagle’s beak.

Kurukshetra war between Kaurav & Pandav lasted for 18 days. On 2nd day Senapati (commander) of Kaurav army, Pitamah Bhishma arranged a Garud Vyuh (a strategic formation or plan) to challenge mighty Pandav. Garud Puran is one of 18 Maha Purans (Hindu sacred scriptures). It contains lessons of life & living in first part and in other part, it contains, funeral rites and life after death. We also use word Garudbharari. Which is used to describe the speed & force with which someone rises.

It is written in Puran that, Sage Kashyap, whom we know as one of the Saptarshis, was married to thirteen daughters of King Daksh. Two of them were Vinita and Kadru. Sage conferred them with a boon for each and left to forest hills for meditation.

Kadru chose to be mother of thousand snakes and Vinita chose only two, who will be more powerful than Kadru’s thousand. Kadru gave birth to thousand eggs and Vinita two. After incubating for five hundred years, Kadru’s eggs hatched and thousand snakes came out.

Vinita, upon being jealous, to see Kadru’s son born. She  became impatient and hatched her first egg, and out came partially formed son, Arun. Who rebuked his mother, for her impatience and flew in the sky to be Sun’s charioteer.

Some say, he also cursed his mother that, she will be deceitfully made slave and his brother will release her from the slavery. Vinita waited patiently for second egg. After, few years the egg hatched and out came Garud. He could change his form and size, at will.

In the meanwhile, deceitful Kadru had tricked Garud’s mother in her slavery, with a wager, about colour of a horse. Garud flied to reach his mother. He felt pain, to see her in slavery of his step mother, Kadru. In order to release his mother from the slavery, Garud reached out to his step brothers, Nags. They demanded Amrit, the nector of immortality, to relieve his mother from slavery.

He then flied in the skies, towards the heaven, the abode of Gods, to get Amrut. Indra had secured the Amrut in highly guarded area, where no one can reach. As Garud started reaching near heaven, the heaven began to feel evil omen. All Gods ran to Lord Bramha for guidance. He cautioned them that, invincible son of Sage Kashyap, Garud is on the way to take away Amrut. Gods immediately returned to the place, where they had guarded Amrut. They increased vigil of the area and waited with arms, for Garud.  On the way to heaven,

Garud had raised his size so much that, as he arrived, the sky was covered with dust, raised by flapping of his large wing. The gods couldn’t see him. Hence, God Varun was requested to blow off the dust, to clear the sky. As gods saw Garud, they attacked him with all their arms, but they couldn’t harm his body. Then he attacked them vociferously. The wounded and scared gods started running in all directions. Then Garud reached the place, where Amrut was stored. There stood a wall of fire, between him and the Amrut. He raised his size nine times with ninety mouths. He filled them with waters of many rivers and blew them on the wall of fire, to subdue it.

The Amrut was kept in the centre of steel wheel with sharp edges and under that two poisonous snakes were guarding Amrut. He killed them and destroyed the steel wheel with his power. After capturing Amrut, he flew towards earth, to offer it to Nags. On the way, Lord Vishnu saw him with an admiration as, in spite of possession of Amrut, he hadn’t tasted it himself.  He offered boon to Garud. Garud chose to be above Lord Vishnu. Vishnu fulfilled his wish by making Garud to perch on his flag pole. The pleased Garud, in return, offered a boon to Lord Vishnu. Vishnu requested Garud to be his vehicle mount. He agreed to that upon releasing his mother from slavery.

On the way, Indra tried to stop him, but after exchange of few admiration for each other, they turned in to friends. Indra offered a boon to Garud. Knowing his mother’s slavery was an act of deceit of his step brothers, Nags, he sought boon of snakes to be his natural food.  Indra and Garud also planned to ensure return of Amrut to the heaven. Accordingly, he reached out to Nags and offered Armut to the Nags, with a condition of releasing his mother from slavery first. The Nags agreed and released her.

There are two contradictions, about the events that took place later. As per first, Garud asked Nags to purify themselves, before tasting the Amrit. As per plan of Indra & Garud, as the snake went to river, for purification, Jayant, the son of Indra came and took away the pot of Armut, back to heaven. And on the way back from river, Garud, devours the nags. As per second, Garud offered Amrut to Nags and after drinking that nag got the ability to slough off their skin.

After releasing his mother and spending some happy moments with her,  Garud went back to heaven,  to be vehicle mount of Lord Vishnu.

In this story, Garud’s step mother, Kadru deceives his mother in to slavery. From this, probably an adjective “Kadru” is used by us, to describe a deceitful person or deceitful mind set.