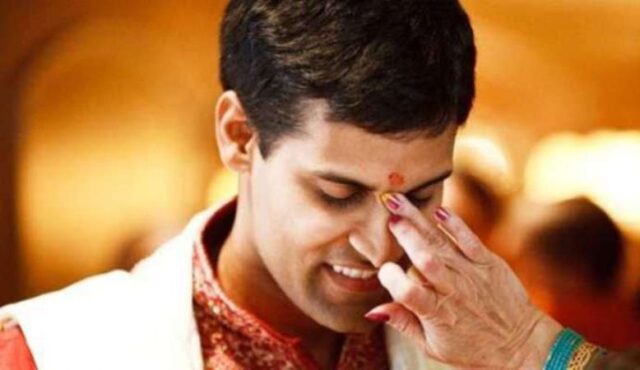 Most Hindus have been following Hindu traditions and rituals. They are written in scriptures, thousands of years ago. There could be some variation in the rituals, based on community or geography, but broader theme remains common.

Tilak is important part of Hindu culture. Few other cultures are also influenced by it, like Jainism, Buddism, Sikhism. It is visually noticeable mark of the culture. Different sect and cultures use different materials to form the tilak. It depends on their beliefs. Some use sandalwood, some kumkum or even Vibhuti (ash). Across the sects, position of tilak is on forehead, between two eyebrows. This area of forehead is one of the seven energy points of the body, also called chakras. It has link with brain. By applying tilak on this point, mind-power of the person increases and he attains peace of mind. Tilak also stimulates concentration and devotion. Entire knowledge and consciousness is concentrated on this point. It is referred as radar or antenna of body. Tilak energizes it.

Though, origin of tilak is not known, there are many references of tilak in the Hindu holy scriptures (Puranas). As per Padma purana, on the left side resided Lord Bramha or the right side Lord Shiva and Lord Vishnu resides in the middle. It also says that, one who wears tilak, becomes fearless.

There is a mention in puranas that, even Lord Shiva praised tilak, while talking to his wife Goddess Uma. He said that, one who wears tilak will ascend to his abode.

As per holy scriptures, the tilak should be applied with middle finger. Since, it is connected to heart, applying tilak will stimulate heart.

Tilak on forehead is used in Hindus for varying purposes. It could be greeting a guest, beginning of some sacred ceremony, or as a visual expression of being follower of a sect (Shaiva, Vaishnav, Swaminayaran and few others)

Shaivas, use a sacred ash (Vibhuti) to make tilak. It has a unique design of three horizontal lines with rounded joints, at either ends, in a form of an arc. The lines are formed using three middle fingers. It completes with a red vertical tikal across these three lines.

Vaishnavas, use sandalwood (chandan) for tilak. It is a formation of two vertical lines from between two eyebrows, till the hairline. At the nose end they join with a V-shape.

Swaminarayan sect (sampraday) use chandan and kumkum for tilak. A formation of U on the forehead with sandalwood and a round red kumkum in the bottom centre of that U.

In old days, tilak was used during coronation of kings and the ritual was also called Raj-Tilak. Tilak was also used to welcome kings. Not just in old days even today, a warrior or a war hero, back from war, is welcomed with tilak, which is called veer-tilak.

There is a scientific side for applying tilak on forehead. As per scientists, brain generates Serotonin and Beta-endorphin. Serotonin is the key hormone that stabilizes our mood, feelings of well-being, and happiness. This hormone impacts our entire body. Beta-endorphin is a substance produced in the brain and it blocks the sensation of pain. It is produced in response to pain, exercise, and other forms of stress. Application of tilak on forehead maintains the balance of these hormones.

Every Hindu tradition and ritual has always intrigued all of us. Because, every tradition or ritual has some logical, spiritual and even scientific reasoning. For decades, students of science have questioned these rituals, but they always got convincing replies. That is why, even they follow these rituals during important ceremonies of their lives, from childbirth to death.