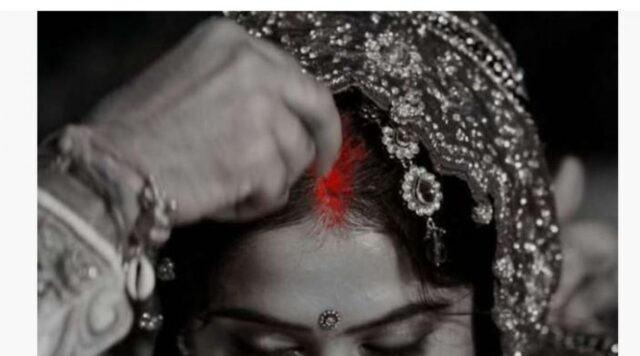 Hindu society follows its customs, traditions and culture. For thousands of years, these are passed over generations. Vibrancy of the society reflects in them.  Every Hindu follows these age old traditions and performs rituals, as mentioned in sacred books of religion. Initially, they must have been passed on to next generation, verbally. Later, they would have formed part of religious scriptures in Hinduism, called as Shastras.

It is intriguing to know, that most of our Ancient Hindu rituals and traditions, are based on scientific principles. It reflects the knowledge, wisdom and progressive approach of our ancestors, few thousand years ago. We are making an attempt to discuss such traditions and their logical reasons.

As per Hindu tradition, married women apply Sindoor (Vermilion) in the parting line of their hair (called Maang in Hindi), forming a small red stripe. It is auspicious for all Hindu married women. However, unmarried girls (kumarika) and widows are forbidden to apply the same. In other words, “Sindoor on forehead represents status of a woman”. Presence of Sindoor means that, the woman is married.  It is one of the five tokens of marriage (saubhagya lakshana). Others being, flowers in the hair, Mangal sutra, toe ring, turmeric on the face. Women from different regions or communities, follow different tokens.

During marriage, an important ritual is that, groom applies Sindoor, five to seven times, on the forehead of bride, along with chanting of marital mantras. It is called “Sindoor Daan”.  The marriage is effected post this ceremony. The tradition says that, applying Sindoor, every day, increases the life of the woman’s husband. It is a visual expression of a desire for their husband’s long life. It helps women spiritually, enhancing mental power. Red colour represents love and passion. Hence, it is applied by women to win hearts of their husbands. It also represents that, she is under protection of her husband and nobody should dare to cast an eye on her. Red colour also represents fire and strength. It suggests that, women can assume of form of Goddess to fight atrocities.

Wearing of Sindoor also has astrological aspect. As per Hindu astrology, location of Mesh Rashi (Astrology based on Moon sign) is on the forehead. The Lord of Mesh rashi is Mars and red depicts him. Hence, wearing red sindoor on forehead is considered auspicious astrologically, too.

As per Puranas, Goddess Parvati also wore sindoor. It is believed that, during marriage of Lord Shiva with Parvati, he applied sindoor on her hair and tradition of sindoor began from there. It is also believed that, she shared this sacred tradition with women of her times and it was passed on to next generations. She is one of the most revered Goddesses for Hindus. They draw lot of inspirational power from her. Hindu women believe, that, they will be protected by Parvati. There is reference in Ramayan, that of Sita applying the same, with a wish of long life for lord Rama. There are references of Draupadi wiping off her sindoor with anger & despair, after her sari was stripped off, by Dushasan, in Hastinapur court. Radha also turned her Sindoor in flames like design. The excavation findings of Harrapan culture suggest that the women of that era (3000 B.C) also applied sindoor.

The sindoor adds to the beauty of married women. It is part of 16 adornments (solah shringar) of married woman’s beauty. Some brides apply longer streak of Sindoor in their hair parting line. Some just apply a red spot at the forehead, at the starting of parting line. New age women wear a fashionable, triangle shaped sindoor on the forehead.

There are scientific reasons also for applying sindoor at the forehead side of parting line of hair. The area is called Bramharandhra and Adhmi. Randhra means a very small hole. Bramharandhra, on forehead, is considered passage of life. These are the apertures on forehead and considered crown of head. Scholars say that, applying sindoor on that position of forehead, stimulates positive thoughts and liveliness.

Study by scholars suggest that, there are few forms of Sindoor mentioned in Ayurveda. Most authentic is prepared from Turmeric, Lime and hint of non-toxic Mercury. In spite of Mercury being toxic metal, moderate use of this metal has medicinal value. It was used for treating ailments in those days. It has an anti-oxidant properties. It works as stress reliever. It helps brain remain active and alert. Thus, everyday sindoor acts as a therapeutical medicine for women, to overcome stress of married life. It also stimulates sexual drive. That is why unmarried women and widows are forbidden from wearing it. This suggests, advanced knowledge possessed by Hindus, few thousand years ago.

Hope this discussion provokes a new perspective of looking at traditions followed by us and rituals performed by us. We will discuss lot of such rich traditions and rituals, which relates us to our rich heritage.