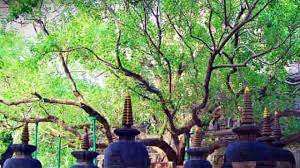 In April- May, Indian healthcare system was overwhelmed by the second wave of Covid-19, leaving hospitals to struggle for life-saving drugs and Oxygen supplies. Painful visuals of people gasping for breath was hallmark of second wave in India. In this chaos of second wave, there were many, who suggested that, people gasping for air should sleep below Peepal tree (Sacred Fig). I wouldn’t call that as a rush of superstition. Though, at many places people followed it, in letter and spirit. It occurred to me that it was indeed a time to discuss importance of the Peepal, in both spiritual and scientific contexts.

Peepal tree finds its roots in India, with aberrations like, Pimpal, peepul, Ashvattha, Bodhi, etc., depending on region and religion in India. In English, it is known as Sacred-Fig or Ficus-Religiosa.

Hindu religion is unique in a sense, where lot of trees and animals are considered sacred. Peepal is one the most sacred for many reason. In Hindu religion, there are lot of myths, superstitions and beliefs associated with Peepal tree. Many Hindus follow weekly rituals such as watering, worshipping or circling the Peepal tree for happiness, wealth and peace of mind. Likewise, even Buddhist worship this as Bodhi. It is believed that Lord Gautam Buddha attained enlightenment under the same tree.

It is really intriguing to find many references of Peepal tree in Hindu scriptures, as highly honoured tree. The most important being, referred by Lord Krishna in Bhagwat Gita- discourse 10, verse 26

Lord Krishna explained to Arjuna, that among trees, he is Ashvatthah. In another verse, he has used Ashvatta tree’s structure as metaphor to explain the never ending universe.  It is believed that he died also under the same peepal tree, which is believed to have marked the beginning of Kaliyug. It is  believed that Lord Shiva, Lord Brahma and Lord Vishnu held their sanmsad (advisory) under this tree. It is believed that Brahma means roots, Vishnu depicts trunk and Shiva reflect leaves of Peepal.

In Bramha Purana, there is story of Lord Shani, linked to Ashvatta. That is why, it is considered auspicious to offer water to the tree and light diya (an earthen lamp) under the tree on Saturday.

In Ramayan, there is mention of Lord Rama taking shelter under Peepal tree, during his Vanvasa (exile). There is another reference, after Hanuman reached Ashokvatika in Lanka, where Sita was held captive by Ravan. Hanuman observed Sita, sitting on Peepal tree.

In Bramha Purana, it is mentioned that Lord Vishnu was born under the tree and he was hiding in it, when Asuras had defeated devas.

There is a belief that Devi Laxmi resides in Peepal tree on Saturdays. That is why, Hindu women worship Peepal on Saturday. Hindus also believe that the departed souls of their forefathers, reside on Peepal tree. Hence, it is sacred ritual to offer water to the tree. However, there is also a belief that since departed souls reside in peepal tree, one shouldn’t sleep under or near tree.

Significance of this tree reflects even in Ancient Indus Valley Civilization, Mohenjo-daro. During 1920, in the excavation Mohenjo-daro site, a seal was found, which had Peepal tree engraved on it.

It is common knowledge that plants and trees release Oxygen O2, during day, in a natural light, wide process of photosynthesis. And at night, through the process of respiration the plants uptake the Oxygen and release Carbon Dioxide CO2. However, Peepal is one of the unique trees, which emits Oxygen throughout 24 hours.

Ayurveda has extensively used medicinal properties of various parts of this tree, to treat different diseases. The powdered fruits of Peepal are used to treat Ashthama. A mix of powder of leaves and jagerrey can offer relief from stomach pain. Ash from of the bark of tree can be applied to treat itching. Bark of Peepal tree is used for various herbal beauty products. Extracts of bark or leaf can reduce cracks of heels. The parts of Peepal can offer relief from diarrhoea, constipation and eye pain. Extract of Peepal tree are useful for treating heart diseases, ear infections and even snake bites.

No wonder Peepal is considered ever expanding universe and tree of life.