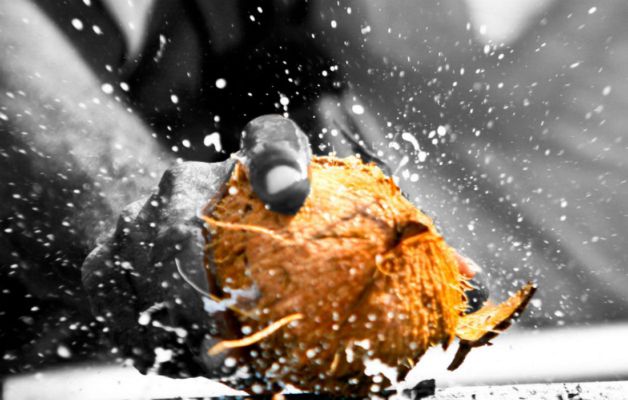 “Papa, Why are you breaking this Coconut, let’s take it home?”. I immediately turned towards the voice. It was a young boy, around 8 years, telling his father in Hanuman temple. It was a last week’s incidence. The innocent question puzzled his father. He was not firmly able to reply his son. Somehow, he managed the situation, saying that, it is our tradition.

Since childhood, we Hindus observe and follow many such traditions and rituals, literally blindly. Because, we saw our parent performing and following them and our belief systems about our parents are very strong. If they have done it, means it must be with a right reason. These rituals could be daily, seasonal or festival centric. Indeed there are amazing logical reasons, behind each and every one of them. Let’s discuss about this one, today

As per Hindu culture, coconut is considered very auspicious and honoured as Sriphala. It is easily available and makes a great addition in many recipes, across India. It is also considered as a token of fertility. That is why it is used in many rituals related child-birth. It is also used in festivals like Narali Poornima (In Maharashtra), when it offered to the sea, by fishermen. It is not just broken in front of Gods or Goddesses, it is also broken during ground breaking ceremonies of houses or bridges and first time use of vehicles on road, even before beginning a long journey. It is believed that breaking of coconut, will take away all the obstacles everything will be safe and go well, as planned. It is used during functions also to welcome special guests. It is part of many or most religious rites of Hindu culture, where is kept on Kalash (copper vessel) surrounded by mange leaves. In India, it is considers a “Tree of Life”, as every part of the tree, be it trunk, branches or fruits, can support sustainability of human beings.

The structure of coconut is unique, a brown hard shell outside and tender white portion & sweet water inside. Nature’s creativity at its best! It could be easily the fruit with hardest outer shell, making it impossible to break with normal force. It is required to be hit against hard surface to break.

There are contradictory views about origin are presence in India. Some believe there are few references of coconut in Ancient Indian scriptures. However, some researchers believe that, the fruit has its origins in East Asia and in first century, it was brought to India.

There are two views related to the logic behind breaking of coconut, in front of God in temple.

As per the first, the hard shell of represent personal ego, anger and other negative elements of character, which are blocker in spiritual enlightenment. It is offered to Gods, as a symbol of humility, where one surrenders himself/ herself and it a token of breaking the negative characters to get closer to God’s aura.

As per second, there is a sense of SACRIFICE behind offering and then smashing to break coconut, in front of God or Goddess. In ancient times, people used to offer live animals or even human beings, as sacrifices to Goddesses, mostly Shaktas – the representation of Shakti (Power). With non-violence teaching of Jainism and Buddism, people started reviewing these rituals. With the appearance of Adi Shankaracharya on the stage, these rituals were invigorated with more practical ones. The found perfect resemblance of head in coconut. Where coir of coconut and shell resembled that of head and bones and water inside the coconut as blood. Over the centuries, societies adopted a non-violent ritual of smashing of coconut to break, instead live animal sacrifices, which we follow till date.

We will bring more such intriguing stories related to our great Hindu culture !