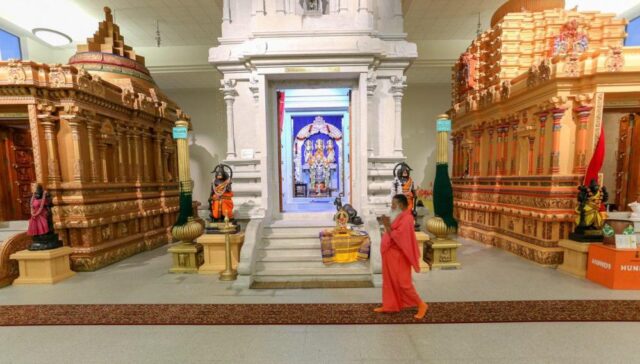 Lord Ganesha said “You are my parents and for me you are the world. That is why, when I perform pradakshina (Circumumbulation) around you, it is like going around the world and coming back ”. Shiva & Parvati were amazed with his answer and declared Lord Ganesha the winner.

We have heard or read this story in childhood, which is from probably Shiva Purana. Once Lord Shiva & Parvati decided to find which one of their two sons, Ganesha & Kartikeya, is stronger and faster. Accordingly, Parvati called both of her sons and told them about this contest. Lord Shiva said “whoever goes around the world and comes back first, shall be the winner”. As soon as he said that, Kartikeya rushed to his vehicle mount Mayur (Peacock) and flew in the sky to perform pradakshina around the world (circumumbulation of the earth). On the other side, little Lord Ganesha, looked like a lazy boy, but extremely smart. He performed the pradakshina, thrice, around his parents and won the contest. Poor Karkikeya came back to see that, Ganesha had already won the contest, smartly.

This story could be the oldest reference to the ritual of Pradakshina, which we Hindus perform, every time we visit temple. Since childhood, we are habituated to follow our parents in performing many rituals, in day to day life. Pradakshina is another intriguing and amazing ritual of Hindus, also followed by Buddhist. Let’s discuss it.

The act of pradakshina is a slow walk, around the idol of deity, with folded hands, visualizing the deity in the mind. This action represents the fact that by being close to god, the devotee can be free from his ego. Barring few exceptions, the pradakshina is always clockwise, with the deity on our right side. There is a belief that, the invisible spiritual waves, emanating from the deities spread on the south side. By walking clockwise, we pass through those divine waves (Divya Parmanu) purifying our souls.

As we know, pradakshina is performed around the idol of deity or the inner temple. In some holy places, people perform it around the entire city e.g. holy city of Varanasi. In some places, where temple of deity is on the hill e.g. Spatashringi Devi temple in Nasik, there devotees perform pradakshina around the entire hill. It is very hard to perform in those hilly terrains. But, such is our belief system that, we go through those hardships to worship our gods and goddesses. Hindus also worship rivers, as source of life and they are respected equally. There is a tradition of river parikrama, e.g. Narmada river in Gujarat.  We even perform ritual of pradakshina, around sacred trees like peepal, tulsi, banyan, audumbar, etc. Some devotees perform pradakshina of four Shankaracharya Peethas, starting from Puri. During ritual of holi, we perform pradakshina around the fire of holi.

Adi Shankaracharya preached us that, pradakshina is manifestation of motionless lord’s grace that, it is at the centre of ten thousand eight universes moving around him. Like in the story of Ganesha, we believe that our deities are the essence and centre of our life. Pradakshina is a physical expression of our acknowledgement of the presence of the almighty in our life.

Pradakshina or Pradakshinam is  Sanskrit word for ritual of circumambulation around the sanctum sanctorum (mandir gabhara), housing the temple deity, sacred tree or even fire. ISKCON scholars explain to us that, meaning of Pradakshina is explained in the verses of Skanda purana. The word pradakshina is coining of four syllable, as follows Pra-da-ksi-na, the syllable “Pra represents dispelling of sin” the syllable “Da offers the desired” , the syllable “Ksi reflects destruction of bad karma and the syllable “Na represents salvation”.

The Skanda purana further explains that, we get salvation from sins, such as ill thinking, sins of speech, bodily sins, with every step of pradakshina. Because of this, there is significance of number of pradakshina related to different gods, deities or trees, who are believed to be offering salvation from those sins. Devotees perform pradakshina around Lord Ganesha one, Lord Surya  two, Lord Vishnu four and seven times for sacred trees, such as Tulsi, Peepal or Audumbar. Twenty one pradakshina in a day are considered extremely auspicious for Hindus.

We will discuss one more intriguing ritual in next blog.