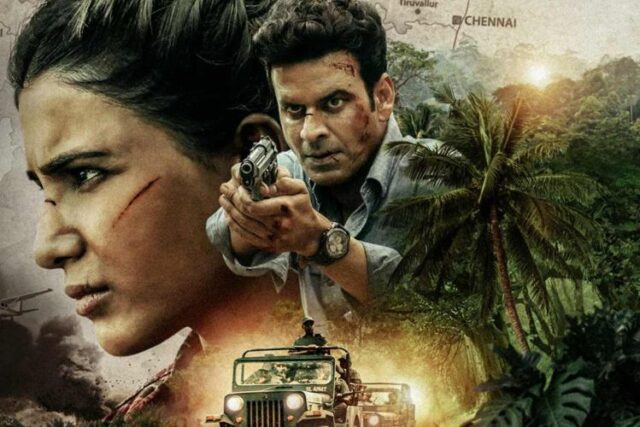 The Family Man: season 2  – Thriller of the year! Amazon nailed it, with this one. In otherwise boring OTT world, this one has stirred excitement. It is kind of season, you want to complete in binge watch and not leave it to next day. A well- written plot by Suman Kumar, Suparn S. Varma, Raj & DK. The plot evolves around regrouping of sleeper cells of “Tamil Tigers”, complemented with some great acting by Manoj Bajpeyi, makes it a must web-series. To my mind, it couldn’t have been better. Heartening to see that, this season has lived up to expectations, built after Season 1.  A must watch for thriller lovers.

Reji, an erstwhile dreaded Tamil tigress, now confined to work in a spinning mill of Chennai, for living. The character is played by Samantha Akkineni. She stole the show by displaying different shades of the grey character. She is facing workplace harassment by her boss, the foreman, who blackmails her in physical relation. She also gets molested by a loose male passenger, during bus journey. In spite of being a trained militant, she remains quiet, to remain low profile and not divulge her real identity. Both of them realise, the real her, but too late. On one end of the continuum, she draws sympathy of viewers, as a helpless woman in front of the foreman and the pervert passenger, in bus. On the other end, she displays a cold blooded trained militant, ruthlessly killing the foreman in most gruesome manner, which shocks and scares. She has portrayed the burning fire within her, with controlled aggression. She is prepared to take any risk for the cause of Eellam, in Sri Lanka. Samantha’s maiden role in a webseries, is a big surprise, in small packet.

First episode starts with a long scene having only Tamil dialogues. One may scramble to check language settings, during that scene 😁. Since, most of the series runs through Tamilnadu & characters being Tamil, there are lot of Tamil dialogues (with English subtitles). It creates a good impact and helps the plot.

The web-series stirred a controversy. Some section of Tamil people raised objections to the depiction of Tamil people and their culture, in this The Family Man Season 2. However, the creators Raj & DK promptly released the statement, which says “Some assumptions and impressions have been made, based on just a couple of shots in the trailer. Many of our lead cast members, as well as key members of the creative & writing team, are Tamilians. We are very cognizant of the sentiments of the Tamil people and Tamil culture and have nothing but, the utmost love and respect towards our Tamil people.”

Character of Chellam, the informer, is most intriguing. One wonders, how deeply rooted his connections must have been with Tamil tigers or probably, he was a double agent? He seems to know everything and Shrikant refers to him much like Google 😁.

First season was about ISIS terrorists, backed by ISI covert operators, plotting a gas leak in Delhi. The plan is foiled by Srikant and his team. The season had a nail biting end in a chemical factory, where he loses a member of his team. This season’s plot has a geo-political backdrop, where India plans to strategically counter China’s aggression. India’s Prime Minister, Ms Basu (Seema Biswas) is desperate to sign a port development contract with Sri Lanka, to keep China, out of Indian waters. This upsets, now in exile, Tamil supremo Bhaskaran, who joins hands with London based ISI operative, Major Sameer.  It is interesting to see, how Bhaskaran is tricked in to it. They jointly plan to strike India, with a terror attack on India’s Prime Minister, during bilateral meeting with Lankan President, in Chennai.

Major Sameer assigns the task to Sajid, a terrorist from Kashmir. He offers logistical support to Regi, in planning the attack. Indian intelligence requests PM to change the venue or differ the meeting, but the Indian PM is not paying heeds to their suggestions. Now, the with Threat Analysis and Surveillance Cell (TASC), has no option than to foil the attempt. The chase begins. There are few instances, where they encounter Reji, but are not able to comprehend. She is well trained and determined that she escapes every time with the help of local Tamil sympathisers. Will she be successful in her plan or she will be stopped ?

In this season of The Family Man, there is parallel plot of abduction of Srikant Tiwari’s rebellious daughter Dhruti. Which is executed by aides of his old enemy Sajid, a terrorist from Kashmir, who is aiding major Sameer in the plot against India. Srikant had encountered with Sajid in past. Srikant’s daughter Dhruti, falls in for a social media friend and starts dating him, without approval or knowledge of her parents and falls in trap. The well planned abduction is a  direct fallout of Sajid’s resentment towards Srikant.

Character of Srikant Tiwari is well articulated by Manoj Bajpeyi. Though he chooses to be an IT guy for sake of family, his heart is still with TASC. He has wonderfully played, his dilemma.  A smart and practical guy, who is willing to die for country, struggles to hold on to the relations with his wife Suchi. She is confused about the relationship and insists on counselor sessions, which don’t work.  His bonding with son seems to building on to the base of season 1. However, with a threat of attack from Tamil Tigers, he joins back TASC and goes to Chennai, in heading the chase of these terrorists.

The director Raj Nidmoru has done great justice to the well written script, ensuring that every episode adds to the thrill and keeps the story unfolding fast. The cinematographer Cameron Bryson has done a remarkable job, especially during fight sequence. Amazing cinematography skills, during training in Tigers’ camp, where camera moves through the path of bullets, fired. Editor Sumeet Kotian has done a great job of maneuvering between multiple plots, unfolding at multiple locations with so many narratives. It makes every episode entertaining and exciting.

The second season ends with clips of Covid spread in India and a Chinese spy communicating on laptop. Looking forward to The Family Man Season 3.