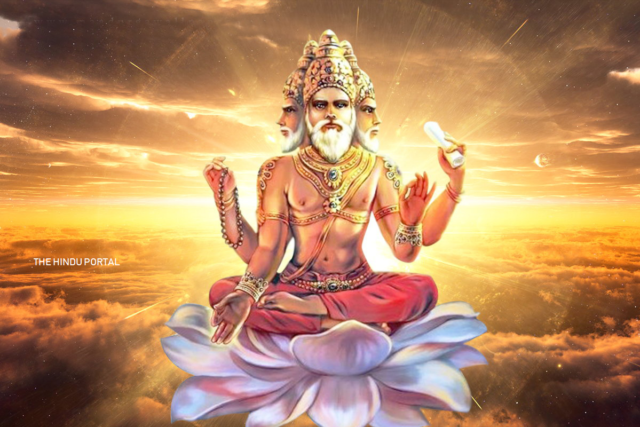 In Hindu culture, it is believed that Brahma is creator of the universe and is first of the supreme divine trinity of Gods, i.e. Bramha, Vishnu and Mahesh (Shiva), also called as Trimurti. Cosmic functions of creation, preservation and destruction & recreation are personified through these three deities. There are temples (famous Elephanta caves near Mumbai), where Trimurti (Brahma, Vishnu & Shiva) is worshiped as one being, in line with the Kurma Purana, where these three gods are manifested as a single God.

There are more than two million Hindu temples in India. Shiva, Ganesha, Vishnu, Ram, Devi Laxmi, Devi Amba, Devi Saraswati, Hanuman, Surya even Kartikeya (Lord Shiva’s son) are some of the prominent Gods and Goddesses, worshipped through these temples. It is intriguing to see that, there is only one temple of the creator of universe, Brahma, in Pushkar, Rajastan. It will be interesting to understand, why such a discrimination against Lord Brahma. Why his supreme divinity is not reflected in worshipping through temples, by Hindus?

The story is narrated by Nandikesvara, the attendant and vehicle mount of Lord Shiva.

Long ago, Lord Vishnu was having nap on sheshshayya (bed formation by Shesh Serpent’s body). Goddess Laxmi and his attendants were around him. Lord Brahma, happened to come there. He asked the lotus-eyed Viṣhṇu, “Who are you, lying here like an arrogant person, even after seeing me? Get up and see me, your lord. I have come here!”

Viṣhṇu got furious with these utterings. But, he assumed calm exterior and said “O Lord, I welcome you with respect. Please sit on this shayya. Why is your face looking agitated and eyes look curious?”

Brahma replied, “Dear Viṣhṇu, I have come with the speed of time. I need to be revered for me being the protector of the world and your’s as well”.

Vishnu replied to him “O dear Brahma, the whole universe is situated within me. But, your way of thinking is like, that of a thief. You are born out of the lotus, sprung from my navel-region. You are my son. Your words are worthless, therefore.”

Nandikesvara further narrates that, they continued arguing with each other like this, each claiming to be better than the other and claiming to be the lord. They got ready to fight, like two foolish goats, desirous of killing each other. Battle began with both of them riding on their vehicle mounts, Brahma on swan and Vishnu on Garuda. Gods passing through there, waited to watch this amazing battle between two supreme deities. Some even showered flowers upon them.

Furious Vishnu discharged sharp arrows and many kind of weapons (Astra) towards Brahma. He also hurled many arrows and weapons with fierce fury, on Vishnu. With a great fury and mental agitation, Vishnu discharged the Maheshwarastra weapon towards Brahma. Furious with this, Brahma aimed the terrible Pashupatastra weapon at Viṣhṇu. The weapons rose high in the sky, blazing like ten thousand suns. These two weapons of Brahma and Viṣhṇu thus faced each other in a terrible clash.

Devas got worried and agitated, as the battle got fiercer. They started talking among themselves. They decided to approach Lord Shiva to resolve the situation. So they went to Mount Kailash, the abode of Shiva. On reaching there, Devas saw brilliantly shining Lord Shiva with Devi Uma and his attendants, around him. Devas knelt in front of him. Shiva welcomed them and told Devas that, he is aware of the reason of their visit and announced his desire to visit the battleground. With a ceremony consisting of colours, banners, music, dance and instruments, Lord Shiva started journey to the battlefield. He was accompanied by Goddess Parvati, followed by his Ganas (disciples), sons, Indra and other Devas.

On getting the first sight of fierce battle, Lord Shiva vanished in the sky. Music, dance and chanting stopped. There was a sudden silence, among the Shiva’s followers. Three worlds were burning with the flames caused by Maheshwarastra and Pashupatastra. Realising the consequences of this fury, Lord Shiva assumed a form of column of fire. Both the weapons were swallowed by the column of fire. Everyone heaved a sigh of relief.

Both Brahma and Vishnu, couldn’t realise it’s was Lord Shiva’s form. They wondered at the sight of this column, which was beyond their senses. They decided to find the top and bottom. So, Vishnu assumed form of boar and Brahma assumed that of Swan. Brahma flew in the skies to find the top and Vishu dug fast through the earth to find bottom. Vishnu couldn’t find the root of the fire. Exhausted Vishnu came back to battle field, after some time.

Brahma, while ascending in the sky, saw a bunch of Ketaki flowers, falling down. He asked them about where they were falling from. The flowers told Brahma that, they had been falling for years, from middle of the fire, without losing their fragrance and charm. Exhausted Brahma thought of deceiving Vishnu, with the help of flowers, to believe that Brahma has seen the top of column. He requested the flowers to go down, with him, to Vishnu and tell him that, Brahma has seen the top of fire column and they were witness to that.

After reaching down to the battle ground, Brahma was full of joy, to see exhausted Vishnu. He told Vishnu that, he has seen the top of fire column and Ketaki flowers are witness to that. The flowers repeated the falsehood.  Vishnu accepted the greatness of Brahma and bowed before him.

On seeing this trickery of Brahma, Lord Shiva thought of reprimanding him. So, he took visible form and came out of the column of fire. Vishnu got up with fear and touched feet of Lord Shiva. Vishnu requested for forgiveness, for trying to search origin and end of almighty Shiva. To Vishnu’s surprise, Shiva said “I am happy that, you stuck to truth in spite of your desire to be the lord. Hence, in future people will worship you on footing equal to me.” Shiva’s supporters and other devas cheered, with that boon to Vishnu.

Pleased with the gesture of Vishnu, Shiva spared Brahma from further action. However, he said to Brahma “In order to extort honour as a lord, you used trickery. Hence, you will neither be honoured in future, nor will you have any temple built for you”.  Brahma apologized to Shiva for his falsehood and then thanked Shiva for sparing him.

Pleased with that, Shiva offered a boon to Brahma that, he will be the presiding deity for all the future rituals of sacrifices. The sacrificial rites and gifts will be fruitless, without Brahma.

Then he turned to Ketaki flowers and cursed them for their support to falsehood of Brahma and said that they will never be offered for worshipping Gods and their use will be restricted to decoration.

This is the story behind, no temple of Brahma, among millions for other Gods. Such are the intriguing traditions of our great Hindu culture. We will discuss more such traditions in future blogs.