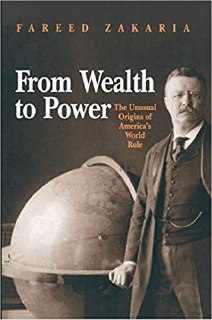 I was intrigued more with the subtitle of the book and I wondered what makes America a great nation that the countries around the world have influence not only on their economies but also social fabric of the society.

I wondered what makes a few centuries old civilization an economic super power having impact on daily lives of people originating from the nations, who had the oldest civilizations in the history of mankind?

Are you a person who takes keen interest in geopolitical and international affairs? Are you intrigued with complex relationships between the nations and their impact on the history? Are you a student of political science or liberal arts?

If yes, this book is a wonderful reading for you. The book is an attempt to answer complex questions which are at the heart of political science and relationships between the nations.

Fareed Zakeria enlightens us with his wit and charm of his wisdom. He is an avid reader and his perspectives in political journalism will astonish the readers.

Here are some nuggets and questions from the book that will broaden your thinking about the relationships between the states.

“The strong do to others what others cannot do to them.”

The “problem of peaceful change” is central to all international politics.

Is security in the international system scarce or is it plentiful?

Are states driven constantly to expand their influence or are they pushed to seek only some minimal level of security?

How does the international balance of power shape a state’s behaviour?

Why do some states define security expansively while others conceive of it in more limited terms?

How broadly does the state define its responsibilities?

Why, as states grow increasingly wealthy, do they build large armies, entangle themselves in politics beyond their borders, and seek international influence?

What factors speed or retard the translation of material resources into political interests?

Is there severe competition among bureaucratic agencies, among the branches of government, between the federal and local governments?

My personal recommendation – a must read for students of liberal arts and political science.