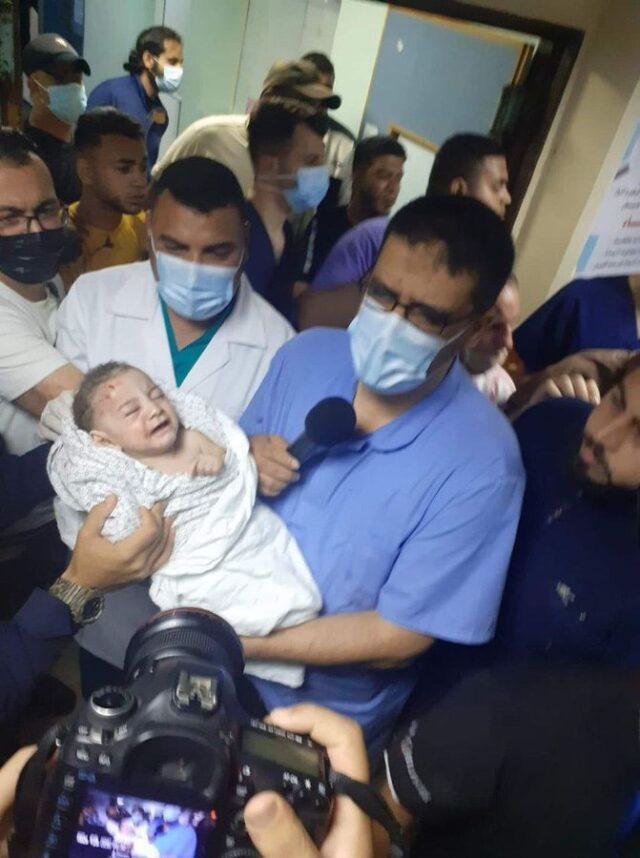 The conflict between Israel and Palestine surfaced again, after many months. As usual, the civilians are suffering in this mini war. Till 15th May, 147 people are dead. Among them are 23 women and 41 children.

Amidst, this relentless bombardment, there was an incident of miraculous survival of a baby. In Gaza, during the rescue operations, paramedics found an infant baby boy, buried under the ruble. They pulled out the injured baby, alive, from ruble and rushed to Al-Shifa hospital in Western Gaza Strip.

Airstrikes on Al-Shati refugee camp, reduced a three storied structure in rubble. Two women and seven children from one family died and this two month old baby boy, Omar, was the only survivor from the family.

This incidence is reminiscence of survival of Moshe Holtzberg, a Jewish toddler, survivor from 26/11 terrorist attack of 2008, in Mumbai. Similar story of survival of baby amidst the armed mayhem.

Phrase in Hindi, perfectly depicts this incidence. “Jako Rakhe Saiyaan, Maar Sake na Koi”! Which means that, one who is guarded by or protected by God, cannot be killed by anyone.

Hope this madness ends soon and the geography attains peace!