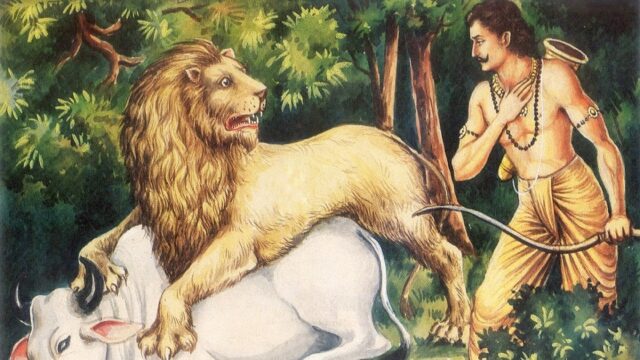 In Epic Ramyan, King Dashrath was Lord Ram’s father. He announced coronation of Ram. Entire Ayodhya got prepared for this auspicious occasion.

Kaikeyi was Bharat’s mother and Ram’s step mother. On the eve of that coronation ill advised Kaikeyi, reminded King Dashrath of the two boons conferred upon her, by him. She demanded Kingdom for her son Bharat and fourteen years exile for Lord Ram. Shocked King Dashrath pleaded her to ask something else. She told him, he could back out, if he wished.

That time Dashrath said to her, Raghukul Reet sada chali Ayi, Pran Jai par Vachan na jai (It has been a tradition of Raghu Clan since ages that, words given once will always be honoured, even at the cost of one’s life). Eventually, As Lord Ram left for exile, King Dashrath died of Ram’s bereavement. That sentence of King Dashrath became a guiding principle for all Hindus.

Let us discuss the story Lord Ram’s ancestors, who set this great life lesson, not just for Hindus, but for entire mankind.

In Valmiki Ramayan and Vishnu Puran, there are references of kings of Suryavansh clan. Lord Ram’s great grandfather King Dilip was a revered and beloved king. In spite of this, he was sad. Reason for his sadness was that he and his wife Sudakshina had no child. Once, they decide to meet Sage Vashist for guidance.

Accordingly, King Dilip and Sudakshini visited Sage Vashisht at his hermitage and told him about the reason of their sadness.

Sage revealed to them that, a curse casted upon them by divine cow Surabhi, is the cause of their childlessness. In their young age King and Sudakshini were passing by the cow, who was eager to bless them with valiant sons. However, they were so engrossed among themselves that they didn’t notice her.  Having felt slighted, Surabhi cow, cursed them that they would never have children, till they atone for slighting her, by serving her offspring.

Having realized their unintended slighting, King Dilip asked the sage for atonement. Sage Vashist told them that, they should take care of cow Surabhi’s daughter Nandini, who was in his hermitage.

For atonement, they stayed back in hermitage. The king assured the sage that he will look after the cow Nandini, in forest. Everyday, King Dilip and Sudakshina worshipped the cow in morning and escorted her to forest. They would wait outside the forest till evening, till she returned. In evening, they escorted her back to the hermitage of sage Vashist. This continued for twenty one days. On twenty second day, Nandini decided to test King Dilip’s valour.

She wandered from forest to greens of Himalayan hills and went in to  Lord Shiva’s grove. Still, Dilip believed that her sanctity will protect her and he didn’t stop her. While she was in the grove, he was gazing at the splendour of nature around him.

Suddenly, he heard cries of  cow. So he ran towards that direction. He found that, a lion had pounced her and he had his claws around her neck and she was at his mercy. King assured her that, he will kill the lion to protect her. He tried to reach for his bow. But, he was shocked to realize that, his arms got frozen. Around same time, the king was surprised, as lion started speaking. He told the king that Lord Shiva posted him, to guard the grove, which Nandini trespassed. Hence, she must die. Lion also told Dilip that, he had casted a spell on the king, so he was paralysed.

King Dilip pleaded to the lion to spare the cow and kill him instead, as he had also trespassed. The lion told him that, he couldn’t spare her as she trespassed and the king followed her, to rescue her. The king argued that he will not be in a position to face sage Vashishta, if he goes to hermitage without Nandini. As sage had trusted him for her wellbeing in forest.

Lion further argued that the king is protector for millions of his subjects and his life is more important than that of the cow. The King replied saying that he valued, his promise to people more than his life. His promises were linked to his reputation and it would live far after he was gone. Hence, the lion should spare the cow and kill him. Finally, the lion agreed. And the spell was broken. King Dilip could move. Hence, he threw his weapons and he bent in front of the lion. He closed his eyes and waited for the death from the lion’s claws.

Suddenly, he heard a sweet voice, asking him to get up. King looked up to see that the lion had vanished and Nandini was standing in front of him. He was surprised. She told him that, King Vashist’s spiritual power guards her. She further told him that, she had created the illusion of lion to test his valour and she was pleased with his devotion. She conferred a boon upon him and he asked for noble son.

After few days, he left for his palace. In due time Sudakshina gave birth to a son. He was named Raghu.

King Raghu’s son was Aja and Aja’s son was King Dashrath, father of Lord Ram. All were invincible in their times. They were revered and beloved by their subjects. They set high ethical standards for themselves and lived up to them. This tradition followed in their clan from Lord Ram to King Harishchandra. We will discuss those stories in other videos.