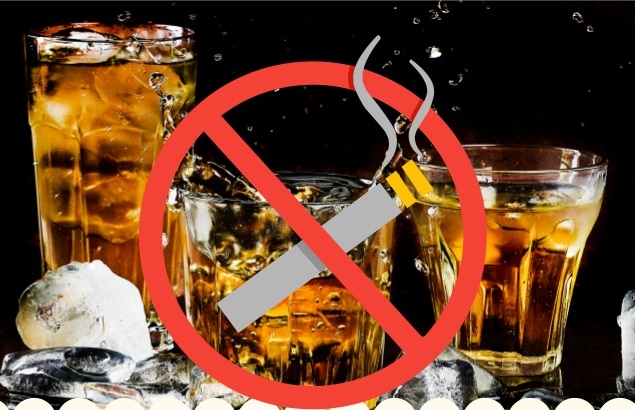 I believe it is very easy to quit smoking and drinking if you decide so. It is more like what Nelson Madela said “It always seems impossible, till it is done”

Let me share with you my experience of how I got addicted to these habits. My father was a heavy smoker, I always remember him of either reading or writing some research paper with cigarette in his hand. To that extent, I was always inquisitive about smoking. Me and my elder brother experimented with smoking when we were 8-9 probably. We were caught by eldest brother. That was it.

But, in college, I actually started smoking regularly. There was only one other smoker in the group, so to that extent, I can’t blame it on the company of friends. I heard so many people blaming their friends for their bad habits. But, they fool themselves. It is their weakness that reflects in continuation of these bad habits. I first ate non-vegetarian food after my 10th examination and it continued regularly. Not that I was great lover of that. But, I enjoyed it.  I first drank beer after winning some college election in 3rd semester, when I was 18. We used to drink  and smoke occasionally during some parties, picnics, etc.

I started my own business at 21 and then probably, I had too much money in hand then and I didn’t know how to spend. There are times, when some people come in your life as a punishment and then things don’t stop, you get in to some vicious circle. My smoking increased, almost 15-20 cigarretes a day. Even, by age of 25-26, I had turned into a regular drinker. I was almost drinking every alternate day, with or without company.

Even after marriage, my habits continued, against the wishes of my better half. I never listened to anyone in my life. I always did what I believed was right. Even, if it turned out to be wrong on the hindsight. I will be fooling myself, if I say that I enjoyed smoking and drinking. I was

By the age of 33, smoking and coughing had almost become part of my personality. Even, I was habitual to tea over the years. So in my late 30s, I was a heavy smoker, addicted to drinks, tea addict. How bad it can be. Non-veg, was not so much of worry. In a limited review of that, even my doctor said non-veg is not something that will affect my health. In 2002, I was hospitalized for hypertension. I started having dreams of me being dead, before my kids get married. That time, I seriously started thinking about quitting smoking and drinking.  I had quit smoking for a month in college, but, started again. Sometime in 1993 also, I had quit for few months, both smoking and drinking, but started again. But in my late 30s, I wanted to give up these things for good.

The hangover is the worst part of drinking. On Anant Chaturdashi of 2003, I had heave drinks, which gave me hangover, next morning. My family was with my brother in law in Virar. I was to visit them. Normally, I need a cigarette in morning, you know why. I didn’t feel like. I went to Virar there also, I didn’t feel like. Late evening, after dinner, we went out, then also I didn’t smoke. I was a first day in many years that I had not smoked till evening. Then, I thought, I had a shot at it and I did it. I gave up. There were withdrawal symptoms, but I handled them well.

My elder son’s birthday and our marriage anniversary are on adjacent days in November and we always went to Shirdi and Vani to seek blessing of our family goddess on those days. Having quit smoking, I was confident that I can quit drinks and non-veg also. I planned and made it happen. I quit drinks and non-veg on 27th Nov. 2003.

In 2013, during my visit to Japan, I started with non-veg. I continued with it till recently and in March this year, I quit that too.

My mantra for quitting bad habbits is that the day you quit that, tell all your acquiantances that you have given up that bad habbit. It helps, because you are afraid of what if someone sees me doing it. This fear keeps you away from the bad habbit.

It is more than 16 years having quit smoking and drinks. I feel extremely good. I hope my experience helps you quit bad habbits. Remember, it is very easy, if you decide to do it.

I will be happy to keep getting feedback.

Life is beautiful, enjoy it !