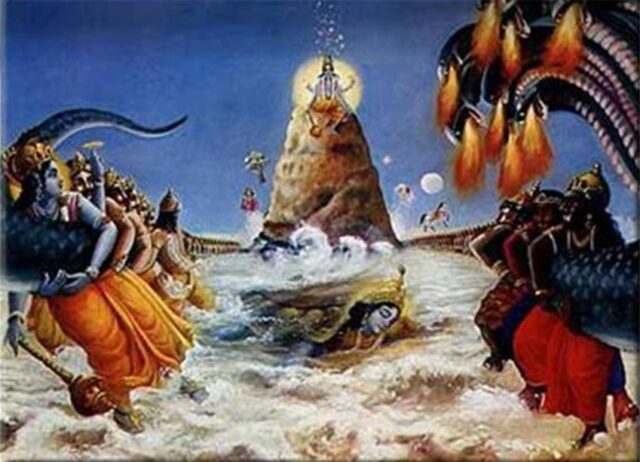 Most hindus know that during Samudra Manthan, Amrut, the nectar of life, emerged from ocean of milk. All the devas consumed it and they attained immortality.

Samudra Manthan is one of the most important stories of Hindu Mythology. It has mention in Bhagvat Puran, Mahabharat & Vishnu Puran. Lord Vishnu played most critical role in the episode.

The story of Samudra Manthan starts with Sage Durvas. Once he was roaming through the jungles for his destination. All of sudden, a nymph appeared in front of him from the heaven, holding a garland of flowers. The flowers had heavenly fragrance and the sage got attracted to it and asked for it, to the nymph. She happily handed over to him.

The sage continued his journey. On the way, he saw Lord Indra the rural of three worlds, riding on his majestic vehicle mount (Vahana) Airawat. The sage Durvas offered the garland to Indra.

He accepted it and kept it on the Airawat’s forehead. Airawat, intoxicated by the fragrance of the garland, took hold of the garland with trunk and flung to the ground. All this happened in front of Sage Durvas. He got furious and cursed the Indra that his power would crumble to ground, much similar to the garland. Indra realized the mistake and pleaded with the sage, who was unyielding.

That day onwards, Indra and other Devas started losing their vigour, power. Asuras took advantage of the situation and attacked the Devas. Having lost valour,  all the devas were defeated by Asuras.

Vishnu suggested them that they should make peace with asuras. Then churn up the Amrut from the ocean. He also suggested to take help of asuras for the same. He assured them that Asuras will not get hold of Amrut. The Devas thanked Vishnu and left.

Devas approached Bali, the kind of asuras. They offered peace with him. During discussion, they talked about Amrut, the nectar of immortality and how it can be obtained, by churning the ocean.

Bali knew about it, but always believed that it was impossible to churn up Amrut. But, he upheld the plan suggested by Devas. Bali discussed the idea with other Asur leaders like Shambara, Arishtanemi, Pauloma and Kalakeya. They all agreed to the idea. With this Devas and Asuras agreed to be friends and work jointly to achieve Amrut.

Asurs and Devas went to ocean of milk and offered prayers. Lord Vishnu had suggested devas that, Mount Mandar can be used as churning rod. They shared the idea with Asuras and all agreed for the same. Together, they uprooted Mount Mandar, with great efforts. But, they couldn’t move it over a distance. Many of them got crumbled under the mountain. They got worried about it.

Around time, Lord Vishnu appeared there with his vehicle mount. With his healing glance the injured Devas and Asuras revived. Lord Vishnu raised the mountain with one hand and placed on Garud’s back. He carried the mountain to ocean of milk and gently placed mountain in the ocean.

Both Devas & Asuras, took their places, Devas at tail of Vasuki & Asuras at head. As the churning began, the Mandar started slipping to the bottom of ocean, because there was no support base. Lord Vishnu came to rescue. He appeared in the form of a giant tortoise a.k.a. Kurmavatar. It was his second incarnation out of ten, known as  Dashavatar.

He  dived in the ocean and held Mount Mandar on his back.  Devas, Asuras & Vasuki got rejuvenated and churned faster. With this churning, Vasuki’s head heated up and fire came out of his thousand heads, which started choking asuras.  Lord Vishnu, again came to help with cooling showers. The churning resumed. Lot of fishes, snakes churned up.

Then churned up a poison, Halahal. It started spreading across. Everyone was afraid that it will kill all the creatures of the earth. They all prayed to Lord Shiva. He came to their rescue. He held the Halahal in his palms and swallowed it and held it, in his throat. Because of the poison, his throat turned blue. That time onward, he is known as NeelKanth.

Then emerged graceful & beautiful apsara Shree. Devas & Apsaras served her with series of auspicious ceremonies. Lord Varun brought Vaijayanti Garland to her. She chose Vishnu and placed the garland round his neck.

The churning continued. Finally, Dhanwantari emerged with the vessel of divine nector, Amrut.

Asuras ran towards him and grabbed it. Upon seeing this, all devas thought everything is lost. They ran to Vishnu for help. He assumed the form of Mohini, the enchantress.

In the meanwhile, the Asuras had started fighting among themselves for the Amrut. She passed near them. Charmed with her beauty, they approached her to distribute evenly within them. She then, made Devas and Asuras sit in two rows. She began distributing the nectar to devas, while bewitchingly smiling at asuras.

However, one of the Asuras, Rahu assumed form of Dev and quietly sat in Devas row. Fortunately, Sun and Soma, the moon recognized him. By then, Mohini had poured Amrut in Rahu’s bowl and he began drinking it. Before it could go down his throat, Lord Vishnu assumed his form and hurled his Sudarshan at Rahu’s throat. The headless body fell down and his head rose to sky. This is the story behind eclipse. Where, Rahu tries to swallow Sun & Moon, at regular intervals.

At that moment, Asuras realized that they were tricked by Lord Vishnu. In the meantime, all the Devas partook the Amrut and attained immortality. Asuras started arming themselves and attacked Devas. A battle started on the shores of the ocean. Upon realizing that the battle was evenly poised, Lord Vishnu came to rescure again with his Sudarshan. He hurled it at asuras, killing thousands of them. Asuras attacked devas with moutains. Vishnu shot golden headed arrows to reduce mountains to dust. Finally, most asuras entered bowels of earth, the patal lok and many plunged in ocean. The victorious devas reinstated mount Mandar to its original place and offered prayers to it.

Then joyous devas flew in sky towards their abodes in heaven. This is how Devas became immortal.

Hope you liked the story. Soon, I will come back with another story.